PARROT ON A MOTORCYCLE by VITESZSLAV NEZVAL

This is a dual-language edition of a manifesto written in 1924 by a founder of the Czech Surrealist Movement.  It was produced in a limited run of 500. The volume consists of two signatures hand-stitched together, with the Czech text forming one half of the book and the English translation forming the other half. 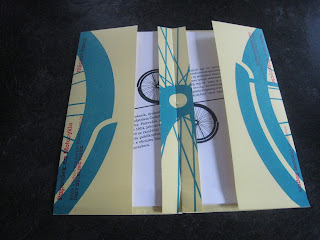 The exterior of the book consists of two front covers (one Czech, one English) that form a single wheel when viewed together. 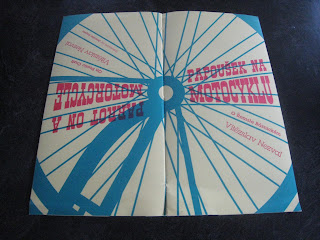 The manifesto begins with an introduction titled “Poetics” -- a preliminary blast from Nezval’s circus of thoughts, in which he announces himself with goals such as “A picture that starts a fire!” and “To have charlatan elegance! / On vaudeville knowingly revise boring stanzas / and behave with careless cordiality.” The main body of the text is presented as a series of declarations in boldface on the lefthand pages; on the righthand pages, a procession of plain, academic-sounding notes appear to annotate or clarify the text to the left.  For example, in one spot, the text on the left issues this definition: “Metaphor: gallant exalted playboy”; the text on the right meets it with “Metaphor, the tool of poetic transfiguration.”

It is a slim book (11 pages of English text, each page the size of a 4”x 8” business envelope), but it’s crowded with images and ideas. It’s the kind of book to sit with on a porch swing with a bottle of Staropramen, alternating sips at the text and swigs of beer. It’s the kind of book I would find maddening were I ordered to interpret Nezval’s thoughts to an ivory tower inquisition, but it’s a fun book just to hang out with. It’s like hanging out at a New Orleans bar with a flamboyant pal cheerfully tugging at one’s sleeve, insisting that one pay attention to his taller-by-the-minute tales: “Fruitless, I was waiting in vain for the arrival of the clairvoyant typist, when fever escaped from the medical encyclopedia, it reached fireworks and is dancing.”

Are parrots even mentioned at all in the book? Indeed, they are invoked four times:


“Collection of ideas, these parrots with magical names.”
“Fiery parrot or Japanese lantern.”
“The poem: miraculous bird, a parrot on a motorcycle. Ridiculous, sly and miraculous.”
“I enhanced the world by 2 or 3 new parrots.”

It’s not a ride for everybody, but Parrot on a Motorcycle can be fun for readers in the mood for a wild little spin around town. Just like riding on a bike, spending time with it can shake fresh colors onto your radar and heighten how you perceive the everyday (yet so extraordinary) mayhem around you.

Peg Duthie is the author of Measured Extravagance (Upper Rubber Boot Books, 2012). She is married to a motorcycle mechanic and has traveled across the U.S. perched on a Kaw.