It's possible to write poems that will move some people without there being a freshness in its language. But for the poets who’ve taken the time to attend to vocabulary for vocabulary's sake, they can create poems more radiant as the text benefits from the devotion they’ve given their raw material of words.

I consider Karen Rigby, with her new book CHINOISERIE, to be among these devoted, painstaking poet-taskmasters. In CHINOISERIE’s poems there are meanings, there are narratives, there are fictions (both true and imagined), there are significances… But ultimately, for me, the poems are about what words reveal instead of what an author intended to say through them. These poems are about the wondrous marvels made available through words. Marvels, yes, for it is obvious the poet not only loves but is in love with her raw material. She relishes these words, finds them delectable, and fortuitously for her readers is able to sculpt (or stitch, given the book’s title) them into poems a reader not only experiences but savors.  For example, “PHOENIX NOCTURNE” which begins


The skull was never a tomb
or curio. A cage

as if bone foretold lessons in turbulence

Sockets drew you in a masquerade.
The jaw, which was hinged
and slack,

which was packed cavity,
the cow’s head staked to the garden—

Your voice, when it left.
Your voice in the desert
circling pink xeriscapes
radiation lantanas.


I could go on quoting from the poem but what I want to draw attention to is the insertion of the words “xeriscapes” and (the combination of) “radiation lantanas.” These word choices bespeak a kind of vocabulary widened through love. This doesn’t result in just the presentation of unexpected words. It surfaces through unexpected juxtapositions—this is significant, too, because Rigby says (in a print-out of an author interview that arrived with the review copy),


“When I write poems, it is often based on trust in the language—the belief that one line will hold the key for the next. I’m never certain where the poem will lead.”


Allowing uncertainty as to where the poem goes is to show trust in words—that words can be trusted instead of being disrupted. As an observation, that can be meaningless except when, as in Rigby's case, it becomes effective as shown by this excerpt from the above: “A cage // picked clean // as if bone foretold lessons in turbulence.” Here, you can see the logic of traveling from (perhaps the thin or bone-like material that forms a) “cage” to “bone” before it takes the unexpected but pleasing leap to “as if bone foretold lessons in turbulence.” This is refreshingly resonant language.
The poetics practice Rigby describes is also most effective when the poet has done her research ahead of time of beginning any individual poem—in this case, by having done what it takes to expand her vocabulary (whether through reading, research, etc). Were these poems to be tapestries, they’d be about as much about the quality of the stitches as the embroidered scenes. Here are a few examples chosen simply by opening the book at random a few times:

—from “LELOUCH LAMPEROUGE PILOTS THE KNIGHTMARE”


Think of the calligrapher

the book revealing what bereft means

crows echoing their brothers the songbirds

city of exiles given to powdered iron.

—from “THE STORY OF ADAM AND EVE”

—from “AFTER THE BELL HAS CALLED THE WOMEN FROM THE FIELDS”

Of bindweed or flourishes, nothing to say about the hand’s elaboration.
Of creamware, only stacked and brittle confusion.

We bargain daylight out of black bread.


A reliable test for good writing is if it compels a reader (who happens to be a writer, too) to write in response to what’s being read. When I began to read CHINOISERIE, I had no intention of writing a review. But as I read it, the words seduced me into engaging with them. The seduction was so strong that I couldn’t wait to turn on my computer; I had to pick up a pen and just start writing an engagement on the nearest piece of paper available which happened to be from desk calendar, to wit: 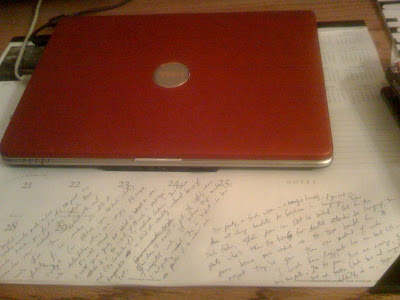 Ah, but let me not ignore the (inevitable) narratives for the words, the tapestries for the stitches. Here’s an example that manifests what’s wondrous about the lyric (and that reminds me of Eric Gamalinda’s early poems wherein I found much purity in his lyricism):


About the beginning
I could tell you the garden bloomed
multiple bells, I could say
everything I learned about beauty I learned
from the body’s ruin:
the rib drawn
through his quartered skin,
the skin sewn and the woman born,
a dark homunculus.

—from “THE STORY OF ADAM AND EVE”


“Homunculus”—I rarely see that word in poems, which is to make my point again about the depth of this poet’s vocabulary.

CHINOISERIE presents an urgent beauty: it is such an opulent textual feast I feel as if each letter on its pages should be rimmed in gold.