S.S. Prasad is an engineer with Cypress Semiconductor Technology in Bangalore, India.  He inscribes what he calls "nanopoems" onto the unused spaces of microchips. You can see an example of what it looks like HERE which features the poem "Game" on a chip.  Prasad offers an interesting concept for making his poems; here’s what the back cover partly says:

"[Prasad] integrates his designs into preexisting industrial prototypes, which sidesteps the prohibitive cost of nanolithography and gives each poem a "print run" of millions.

Prasad was inspired by research engineer Ghim Wei Ho, who creates silicon nanostructures tha tshe calls nanobouquets. Prasad often uses binary language in his silicon compositions. The poems, invisible to the naked eye, spring into the view of any engineer who might later examine the chip under a microscope. "Game" ... is only 75 micros in height and 40 microns in width (each micron is one thousandth of a millimeter in size).

So these poems have print runs of millions even as they are invisible to the naked eye -- I like that!  And that the poem becomes visible only under a microscope is, to me, a wonderful metaphor for a poem's requirement for (deep) attention. For those who want to see examples of these otherwise invisible wonders, we have his book 100 Poems.  What's admirable is how the concept, with its many variations of "1"s and "0"s fitted within nanospace, doesn't get tiresome.  Here's a charming one-liner:

100 Poems is a worthwhile read because there are enough mischievous and/or humorous examples to make one chuckle or grin.  Here's one example from conflating two letters (apologies for poor image quality; the paper is white but thin so some of the text on verso pages are visible): 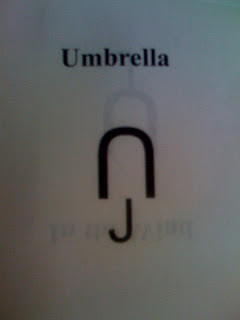 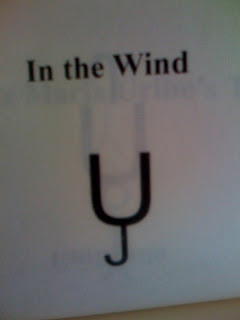 My favorite, though, is "The Butterfly" which moves across three pages.  If you consider the use of two "O"s as the body and the surrounding "1"s as what comprises the flutter of wings, you could interpret the movement of the two "O"s across the first two pages and the single "O" across the third page as indicating a butterfly's flight: 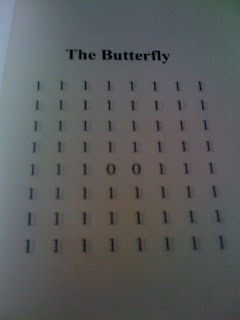 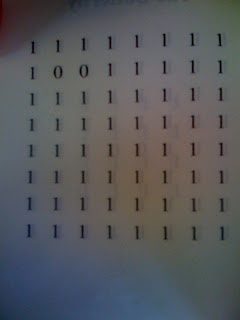 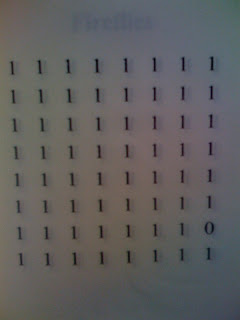 These "nanopoems" show how much imagination Prasad bears to (what are mostly) "1"s and "0"s in a limited space.  He makes us admire his poems because his poems enchant with so little.  It's worth quoting this from the back cover:

Prasad's work responds to the poetry of Raul Zurita, a Chilean writer who in 1982 hired five airplanes to inscribe 15 verses, in five-mile tall letters, across the sky over New York City.  In a poem that has not yet been nanoed, Prasad declares: "Zurita, / you're a gigapoet. / For you, the sky is a page. // I'll be a nanopoet, / write nanopoems."

Prasad's contribution to visual poetry is not just more ecopoethical but quite enlivening!