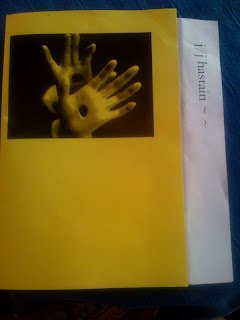 The yellow cover, as you can see, is thinner than the interior pages, beginning with that pale lavender page.   It's as if the cover cannot contain what is inside.  It's a perfect visual metaphor for how so many of hastain's poems -- including this chap-length one -- work: the poems reach out for engagement and often succeed. I love this highly-effective cover design!

Innervations of post-threshold threshing. Wanted all of your tattoos to be of wanting. Wanted you to come in my eyes so I could see. This dependency on ether-lipids. It matters to note that since then, we have never washed our sheets.

This poem, like many of hastain's, is enervated by the desire to create new worlds that go beyond gender as a reductive binary:

What other taunts in place of chronology or normativity?
Minarets seeping from ephemeral loins.

The language is paradoxically smooth -- the text flows so smoothly and yet carries a punch!


One should acknowledge the significance of the image on the front cover (palms with holes in their centers) as well as the epigraph:


In one section hastain writes, "In an attempt to get home we never rest." I first responded selfishly to that by hoping the poem's persona or hastain never gets "home"  because the attempt generates such wondrously alchemical results -- for example, how this same section ends with

Multiplicitous labors to upkeep divergent foundations. Fecundations. We believed in veer. Tactics and tacits. Creamy ratios. The moon was this world's first cave.

But, more importantly, the phrase is "...we never rest" not "...I never rest".  hastain may be depicting an interior passage but what hastain's opened up as a possibility is that there is/are others within one and it wouldn't surprise me if hastain would be open, too, to being part of other's or others' interior explorations.  A "hole" -- as is the case with certain Native American weavings -- represents a space for entry by others...


If the hole is within a proferred hand rather than more obvious alternatives, isn't the offer more intimate? More difficult to resist ... more easy to accept...?

I was going to end the review here, but my gaze snagged on the above parenthetical: “(Perhaps the base for such a search cannot be the exterior when the birthed body often cannot encompass the individual's identity.)  Let’s de-parenthesize that, then, by turning to one of hastain’s earlier books which reveal how pleth* poetic strength is partly but powerfully rooted in hastain's innovative language, asymptotic lover // thermodynamic events (BlazeVOX, 1998).  I remember this book partly because of its opening poem which begins:

It can certainly be said that “the shape” may be the inherited body.  And, in Wall Street-ese, “dividends” are the benefits of acquired stock investments.  So this poem may be read as not allowing one’s self to be limited by something one didn’t have a choice in: what the individual inherits.  “[S]laughter the clock” and move instead to benefits.  Of much relevance, hastain is “genderqueer” which pleth* says “is a catchall phrase term for genderidentities other than ‘man” and ‘woman’.” (I take that quote, by the way, from hastain's brilliant essay “Engaging My Trans” which I highly recommend and is printed in our collaborative book the relational elations of ORPHANED ALGEBRA ).

While pleth* genderqueer identity—life!—is a source for many intriguing poems, e.g. from “emollient elysium”

it is the most  human hosanna to continue

these acts of plentitude
and rose

—it is hastain’s language that transforms the reader into a fan—into a lover—of what is read if not projected out from the page.  Some poets disrupt language—while hastain does do that, I am more inclined to feel that hastain is looking to alchemize—dare I say, purify?—language from its insufficient terms. As hastain says in “confessions of the absolute zero eye”

The act equaling the (desired) goal (versus, as that cliché of compromise posits, the goal excuses the procedural actions).  hastain’s disruptions, though, occurs wisely by being done so lovingly (and compassionately).  This is what makes pleth* so effective as an author of love poems even as hastain is also writing about stuff that takes many people out of their comfort zones—from “please please mezzanine me”:

deciduous mouth pieces with essence
and a delicate materiality

hastain ends pleth* essay “Engaging My Trans” by noting that if someone calls hastain by the pronoun hastain desires, then that someone would have created “non-debatable home” for hastain. (That pronoun is "pleth".*)  A home is also a gift.  What the poet realizes is you often receive gifts by first offering gifts.  hastain’s gifts to the universe are love poems whose uniqueness-es often result in relationships birthed—from “estival lace features”:

this being why i weep when together
we pronounce the word

+++++
* "Pleth" as a pronoun not limited by gender binaries is discussed in j/j hastain's essay "Engaging My Trans", published in the relational elations of ORPHANED ALGEBRA (Marsh Hawk Press, N.Y., 2012)


Eileen Tabios does not let her books be reviewed by Galatea Resurrects because she's its editor.  But she is pleased to point you elsewhere to recent reviews of her books. the relational elations of ORPHANED ALGEBRA, a collaboration with j/j hastain, is reviewed by Susan Schultz at Jacket2 HERE, and by Amazon.com Hall of Fame reviewer Grady Harp HERE.  Another book SILK EGG: Collected Novels is reviewed by Thomas Fink in Press 1 and by Nicholas Spatafora in OurOwnVoice.