Thanks as ever to GR's numerous, generous volunteer staff of reviewers. In addition to some wonderful feature articles, we have 104 NEW POETRY REVIEWS this issue!

Such reviews include "50 POEMS IN 50 BOOKS IN 50 DAYS," by John Bloomberg-Rissman -- a fabulous section featuring a review of a poem from 50 books written over, mas o menos, fifty days. While each review can be read on a stand-alone basis, I actually think there's another layer that surfaces from reading all 50 poem-engagements in one sitting (as regards subjectivity, always relevant to criticism) -- try it, why not!  Then there's an "Afterword" where John presents an essay from his notes during his reading process -- a process perhaps made possible only by his retirement from being a SUPER-LIBRARIAN!  (Perhaps the process was possible partly because he was a librarian!)  Thanks to John for his generosity, and Happy Retirement!

Poetry has enhanced my love of lists so here are GR's latest poetry-lovin' stats!

As of Issue No. 18, we are pleased to report that GR has provided 1,133 publications with new reviews (covering 437 publishers in 17 countries so far) and 72 reprinted reviews (to bring online reviews previously available only viz print or first published in now-defunct online sites). With this issue, we increased our coverage of poetry publishers by 25 to 437 publishers. This is important as I feel that much of the ground-breaking poetry work is being published by independent and/or relatively small presses who (by the nature of their work) are not always as well-known as they deserve to be.

I continue to encourage authors/publishers to send in your projects for potential review -- note that because we believe in Poetry's immortality, GR does not limit reviews to just "recent" poetry publications. And, obviously, people are following up with your submissions! Information for submissions and available review copies HERE. Future reviewers also should note that the next review submission deadline is Nov. 11, 2012.

Of reviewed publications, the following were generated from review copies sent to GR:

Among this issue's offerings is "By Way of Introduction: W.H. Auden vs. the M.F.A." from a forthcoming memoir by this issue's Featured Poet Sandy McIntosh.  Entitled A Hole In the Ocean: A Writer's Apprenticeship in the Hamptons," the memoir looks to be a good read and GR is pleased to provide a supportive boost in spreading the word about it.  Sandy will be blogging-the-writing of his memoir at his new blog at http://hamptonsapprenticeship.blogspot.com/.

Among the reviews in this issue is one first written as a college class assignment. Emily Geris is a sophomore studying Creative Writing and Women's, Gender, and Sexuality Studies at Macalester College in St. Paul, MN. Her review of torch song tango choir by Julie Sophia Paegle is her first poetry review, completed as a final project for poet-professor Kristin Naca's Latina/o Poetics class. This isn't the first time GR has published a review by a young writer -- we also have a review by college junior Graham Sutherland on Long Distance by Steven Cordova; part of GR's vision is to encourage the rise of more writers interested enough to engage with poetry.  If you are a teacher, feel free to email me at GalateaTEN@aol.com if you see a possibility of GR offering encouragement-through-publication of your students' critical writings.

As I've said before, your Editor is blind, so if there are typos/errors in the issue, just email Moi at GalateaTEN@aol.com or put in the comments sections and I will swiftly correct said mistakes (since such is allowed by Blogger).
*****

All of us at Galatea hope you enjoy the issue! 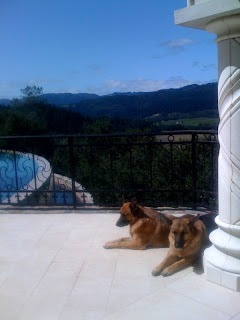 With much love, poetry, vino and fur,